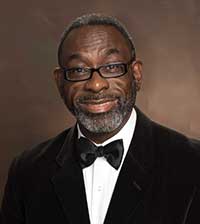 Pianist, organist, songwriter, and choir director, has served the congregation of the Shiloh Baptist Church of Plainfield, New Jersey as Minister of Music since 1988.

A native of Houston, Texas, Wendell completed his elementary and secondary education there and attended the University of Houston as a Music Education major prior to relocating to New Jersey. Additional studies in general music, church music, and organ have been done a Westminster Choir College and Westminster Conservatory of music, both located in Princeton, New Jersey. Wendell is currently enrolled as a Distant and Independent Adult Learning (DIAL) student through the Thomas Edison State College of New Jersey where he is satisfying the core curriculum requirements to receive his Bachelor of Arts Degree in Music. Privately, Wendell studied piano with Dr. Danny R. Kelly - Associate Professor of Music, Prairie View A & M University.

Wendell began playing the piano at an early age and has accompanied many gospel soloists and singing groups over the years. Most notably is the internationally acclaimed gospel recording artist, Yolanda Adams.

Wendell has served as an adjudicator at many musical competitions for organizations such as the Leukemia Society of America, and the Omicron Chi Chapter of Omega Psi Phi Fraternity. He is also highly active with the Gospel Music Workshop of America, Inc. where he serves as General Secretary of the National Men’s Council and Asst. Chapter Representative of the North New Jersey Chapter. In 1994, Wendell was the 1st Place recipient of the Ed Smith Memorial Scholarship Award presented by the Rodgers Instrument Corporation at the annual convention of the Gospel Music Workshop of America held in Atlanta, Georgia (1994). At an awards ceremony held in July 2009, Wendell was a recipient of the Rev. James Cleveland Pinnacle Award presented by the Houston Chapter of the Gospel Music Workshop of America, Inc. for excellence and years of service to the gospel music community. Also, in 2009, Wendell was awarded a seat on the Board of Directors of the Plainfield Symphony Society where he currently serves as part of the Outreach Committee. Other awards and acknowledgments are too numerous to list here.